This 1970s St. Louis ranch home was purchased as a fixer-upper. There were many obvious improvements to be made, and a home inspection showed it was in decent shape, making it a good candidate for a remodel and updates.

While renovations were in full swing, Mosby Building Arts’ carpenters made an interesting discovery when replacing interior trim on all of the windows: one of the load-bearing walls had been compromised by an improperly installed window. It appeared that in the recent past, a window was turned into a doorway, and a new window was installed into a previously blank wall without understanding of structure or concern about which walls were load-bearing. As shown in the diagram above, four vertical wall studs were severed to make way for a 6’ wide window. Blocks of 2x4s were installed between the cut studs above the window. From work they had completed in the basement, the Mosby crew knew this was an exterior load-bearing wall, and that these blocks were a bad sign. Suddenly, the slightly sagging ceiling above this window made sense – it wasn’t just the normal movement seen in older homes, it had begun caving in from having no support!

This compromised load-bearing wall was undetected during inspection because it was a non-destructive home inspection. Other than that slightly sagging ceiling, there were no other indications of a structural problem to tip off an inspector. Only when the interior of the wall was exposed was the damage revealed. This is, unfortunately, a common occurrence for remodelers, because they are the ones who dig into walls and uncover what lies behind them. 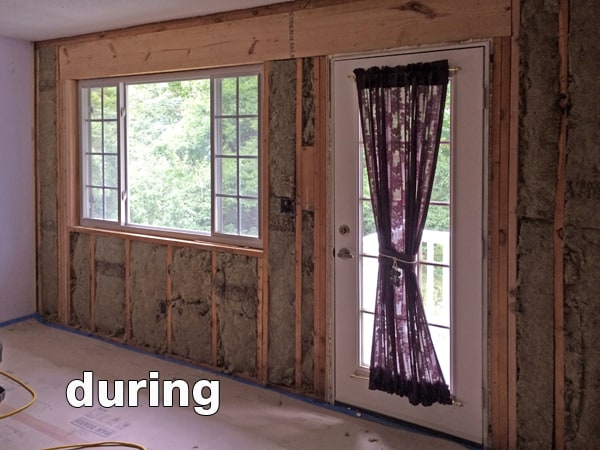 The discovery of the compromised load-bearing wall prompted a decision from the homeowner to install a new window unit. This repair and the lead-time on ordering a new item caused an unplanned delay in the project. But it was fortunate to find this potentially serious problem during construction rather than years later when damage and the expense to repair it would have been substantially more serious and expensive. This story illustrates how important it is for qualified professionals to identify load-bearing walls before undertaking any remodeling project. And that sometimes shoddy construction can be covered up just well enough to go undetected by home inspectors and remodelers – but only for so long.

Unexpected curve-balls are the nature of remodeling, and luckily for these homeowners, the Mosby Building Arts construction crews are experienced professionals who work quickly to solve problems. If you need load-bearing walls in your Metro St. Louis home identified, repaired or modified, call the Mosby office at 314.909.1800 or contact them here.

Why Work with Mosby Building Arts?

If efficiency, knowledge and quality craftsmanship are of the utmost importance, then Mosby is the partner for you. We are a design build firm that handles every aspect of your remodeling project from beginning to end. All team members needed to complete your project (designers, architects and production crews) are under one roof to provide time and monetary efficiencies, quality control, and seamless communication throughout.

Whether you are considering a kitchen remodel, a bathroom makeover, or a lower level renovation, understanding the return on investment is important. Homeowners often ask us if a project makes financial sense, or if it will increase the resale value of their home. Collaborate with a team of architects, designers and craftsmen you can trust when choosing Mosby Building Arts.

Whether you are considering a new roof, replacement windows, or increasing curb appeal with a front door, understanding the return on investment is important. Homeowners often ask us if a project makes financial sense, or if it will increase the resale value of their home.

There’s no need to deal with multiple companies, or the frustration of the left hand unaware of what the right hand is doing. Mosby takes the guesswork out of home remodeling by planning the work and working the plan. You will know the scope of work and price before the first hammer swings. And the work will be done with a commitment to excellence and your happiness. All of Mosby’s remodeling work is backed by our 10-year workmanship warranty.

You can trust you’re in good hands with Mosby: